The science of surfing

Whether or not you realize it, as a surfer you’re a master of complicated physics. The science of surfing begins as soon as you and your board first hit the water.

The board’s size and light construction help it displace a lot of water.
In turn, a buoyant force equal to the weight of the displaced water pushes up, counteracting you and your board’s weight.

This lets you stay afloat while you wait to paddle for a wave. And what exactly are you waiting for? The perfect wave, of course.
Like other waves in physics, ocean waves represent a transfer of energy. Wind blowing across the ocean accelerates water particles near the surface,leading to the growth of ripples that become waves. These deviations from the flat surface are acted upon by gravity, which tries to restore the surface to its original flat state.

If the topography of the shoreline is even and smooth, this will refract the waves to become more parallel to the shore as they approach. This is the crucial moment. As the wave gets near, you quickly pivot your board in the same direction as the wave
and paddle to match its speed. Your board forms an angle with the water, and this creates a dynamic pressure on the bottom of it, forcing you and your board out of the water, to skim along the surface.

At the same time, your increased forward momentum makes you more stable, allowing you to stand up and surf along the wave.
Now you’ve caught the wave, and are riding along its front face parallel to the shoreline.
Fins on the surfboard allow you to alter your speed and direction by repositioning your weight. Above you is the wave’s crest, where the water particles are undergoing their greatest acceleration.

That forces them to move faster than the underlying wave, so they shoot ahead before falling under gravity’s influence.
This forms the waves’ characteristic curls, or jets, as they break along the shore. Sometimes, the curl might completely enclose part of the wave, forming a moving tube of water known as the barrel.Because of irregularities in the seafloor and the swell itself, few barrels last as long as the legendary 27-second ride off the coast of Namibia.
But many who manage to get barreled have said they feel time passing differently inside, making it one of the most magical experiences a surfer can have.

Of course, not all beaches are created equal.Offshore underwater canyons or rock formations in certain locations like Nazare, Portugal or Mavericks, California refract the incoming wave energy into a single spot, creating massive waves sought by surfers worldwide.
And some of these waves travel for more than a week, with swells originating more than 10,000 kilometers away from shore.
Waves surfed in sunny California may have originated in the stormy seas near New Zealand.
So while you may not be thinking about weather patterns in the South Pacific, tectonic geology, or fluid mechanics, the art of catching the perfect wave relies on all these things and more.

And the waves we surf, created by wind, are just one visible part of the continuous oscillation of energy that has shaped our universe since its very beginning.

To learn more about us please browse our Webpage. If you don’t want to wait: 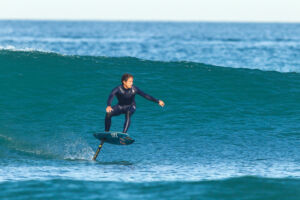 What to do in Caleta de Famara

What are surf fins used for? 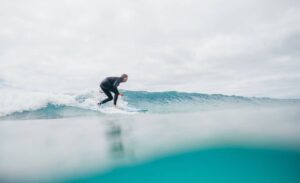