Caleta de Famara is a small coastal village located on the north shore of Lanzarote, in the Natural Park of the Chinijo Archipelago, away from the island’s more touristy areas in the south.

In the last few years Famara has become the place to be for numerous surfers from all over the globe, who have come to check out the best beach and reef breaks of the island known as the “European Hawaii”. The 6-star ASP event La Santa Pro, leg of the world surfing championships, is held every year in October at the beautiful beach of San Juan, a few hundred meters away from the village. At present Famara is a multi-cultural mix of locals and surfers from all nationalities living together in a laid back atmosphere. There are several restaurants, bars, terraces and grocery stores, all within walking distance of each other. In the village you will also find skate, bike and car rental, a training centre, Pilate and Yoga classes, and a massage centre. 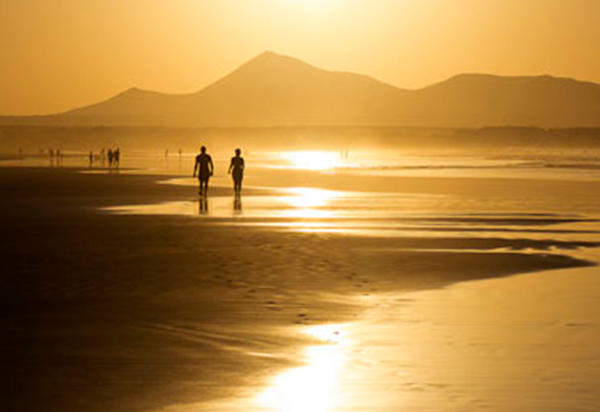 Famara beach is a remote 3-km-long stretch of sand and dunes. It borders with Caleta de Famara on one side, and with the Risco mountain on the other, making for a beautiful and unique landscape. It is a perfect playground for joggers, bathers, surfers, windsurfers and kitesurfers, and provides enough space for all to enjoy the beach peacefully, all year-round.

The beach’s numerous peaks can accommodate surfers of all levels.

HOW TO GET HERE

There is only one airport in Lanzarote, in Arrecife, the island’s capital city. It is located in the south of the island, a 25-minute drive from Famara. To get to Famara from Arrecife airport, the best options are either getting a taxi (approximately €40 one way) or renting a car, which may actually work out cheaper than the return taxi fare and will give you the flexibility to get around the island during your stay.

BY TAXI
You can catch a taxi directly from the terminal without previous booking, at any time of the day and night. The fare to Famara is approximately €30 and takes 25 minutes.
BY CAR

On leaving the airport, follow Arrecife/Yaiza, then take the first exit on the right to follow Arrecife/Playa Honda. Once you are on the main freeway to Arrecife, take the first exit on the right, to Playa Honda/San Bartolome. At the first roundabout keep going straight, then at the second take a left to drive under the tunnel. At the roundabout just after the tunnel keep going straight to follow San Bartolome. Take a right turn to follow the road then at the next roundabout take a left. After this, drive straight for several kilometres until you arrive in San Bartolome, and once there, follow Teguise. Just before arriving in Teguise, at the roundabout you will see the sign to Caleta de Famara on the left.

You can check bus timetables on intercitybuslanzarote.es. The total fare is approximate €4.

BOOK YOUR NEXT SURFING HOLIDAY WITH US NOW!

CHECK OUT MORE INFORMATION ABOUT SURFING WITH US